It seems the appearance of the Slusho Truck at San Diego Comic Con has marked the beginning of an exciting new chapter in the "Cloververse". Surely this signals the imminent start of the ARG for Cloverfield 3.

There has been a lot of speculation that 'The God Particle' would become the next movie in the “Cloververse”, however screenwriter Orn Uziel confirmed in May the 'The God Particle' script would be rewritten so it could be turned into the third Cloverfield movie.

Originally scheduled for release on February 24th, 2017, it then got pushed back to October 27th. Then at this year's San Diego Comic Con, it was pushed back again to February 2nd, 2018 —and the name "The God Particle" was officially removed and replaced with "The 2017 Cloverfield Movie". This almost certainly means that the film will receive a new title before it's release in February next year.

This news, while surprising, may have been a strategic move by Paramount and Bad Robot. Sources have reported that Jigsaw (the 8th film in the Saw franchise) opens on the same date, October 27th, and going up against an iconic horror franchise right before Halloween could result in a challenging opening. Perhaps Bad Robot and Paramount didn’t want to risk sharing an opening day with such a large, moneymaking franchise.

With all this news, hopefully we are going to get some new intriguing leads to the new ARG soon. Especially now, with just over 6 months until the release of 'Cloverfield 3', it certainly feels reminiscent of the amount of time Cloverfield’s ARG had to develop. Nevertheless, it’s going to be very exciting to see how this ARG plays out!

What are your thoughts on the new information? 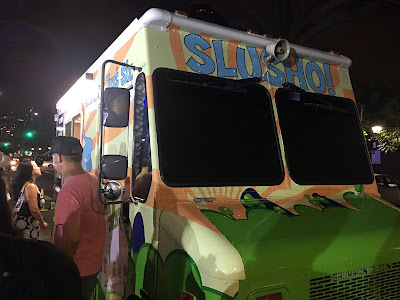 Steve Zaragoza, from the Cloverfeels Podcast, spotted a Slusho truck outside of Comic-Con last week, handing out free drinks. #InGame

The truck displayed a new twitter account - @SLUSHOTRUCK - and based on some of the tweets, it appears to be driving around the country.