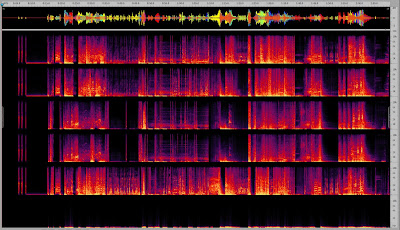 I have separated the surround sound audio channels from the new HD Cloverfield trailer, and saved them as individual files:

You can also download the complete set here: http://rapidshare.com/files/70863735/Trailer2AudioMP3.rar.html

Here is the current transcript, which I will updated as the files are analyzed:

[Rob looking into the camera]
Rob: My name is Robert Hawkins. Approximately seven hours ago, um, some thing attacked the city, um, if you found this, if you're watching this, then you know more about it than I do.

Marlena: OK, we can not go into the middle of the city. We've got to get out of here!

Soldier: There’s nothing you can do for her now

Marlena: Do you know what that thing is?
Soldier: What ever it is, it's winning.

Unknown: Turn that camera [off]

[Buzzing sound]
Marlena: What was that?

Rob?: Still filming?
Hud?: Yeah, people are gonna want to know, you know, how it all went down