To Investors: Concerning the RRC Article
Tagruato is aware that many of you are shocked and angered over the recent article by the Ravaille Research Center. The Slusho! Board of Directors would like to assure you that the article's claims are completely false and that there is no Seabed's Nectar available outside their contained factories. The author of the article, Dr. Abe, is known for his suspicious research methods. In 1994 he was brought before his university's academic board in regards to his genetic manipulation of Australian Aphynos. We have dealt with similar predators before. The article has been stripped from all subsequent issues and our legal department is currently looking into further retaliation methods. Please contact a Tagruato representative for more information on this matter.

A search of "Aphynos" is fruitless, but a search for "Ravaille Research Center" leads to a post on the original Science Forums by 5Pancakes: 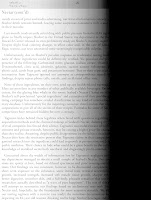 Hi! I’m new to the boards. You all seem very well read so I hope someone nows what I’m talking about.

I'm attaching a article I found about the Slusho! drinks and the weird affect it's having on people. I'm worried because my 2 boys drink it everyday.

Attached to the post, was the "nectar" document above. The document addresses health concerns about Slusho's secret ingredient:

Last month, [inadvertently] coinciding with public pressure from the FDA [regarding]
plans to finally import Slusho! to the United States, my department at the [Ravaille]
Research Center realised its own preliminary study on Slusho!'s mystery [ingredient].
Despite slight food coloring changes to affect color and, in the case of [Chocolate]
Rage, texture, our tests uncovered some surprisingly recognizable culprits.

None of these ingredients, on their own, send up any health-related warning [flags.]
Most are prevelant in any number of other [publicly] available beverages. [Except, of]
course, for the glaring blue whale in the room: Seabed‘s Nectar ("kaitei no mitsu"),
Slusho!'s self-proclaimed "special ingredient" and centerpiece of their prolific [adver-]
tising campaign has somehow evaded classification in any kind of [international di-]
etary database. Unfortunately for the inquiring consumer, there’s no law that [requires]
corporations to give all of the secrets of their recipes. Formulas for some of Slusho!'s
competitors have remained hidden for over a century.

Tagruato hides behind these legalities when faced with questions regarding [their]
acquisition methods and the chemical makeup of Seabed's Nectar, claiming the [threat]
of rival companies has forced their silence. Tagruato’s successful evasion of both [gov-]
ernment and private research, however, may be costing a higher price for [consumers]
that they realize. Assuming, despite public disagreement on the subject, that [Seabed’s]
Nectar does have the restorative powers that Tagruato claims in their campaigns. [Or-]
ganized research into the ingredient could lead to growth in preventative and [homeo-]
pathic medicine. Their choice to hide what could be a great benefit to the [collective]
knowledge of mankind seems both unethical and disgustingly profit-oriented.

Concerned about the wealth of information lost by Tagruato‘s negligent [attitude,]
my department managed to obtain a small sample of Seabed’s Nectar. Our [conclu-]
sions are spotty at best, based on diluted specimens and poor investigative [condi-]
tions. Our findings are too consistent, however, to be discounted completely. [The]
short term exposure to the substance, some initial tests revealed accelerated [cell]
growth, increased strength, increased soft muscle tissue growth, sharper [eyesight],
better digestion. smoother skin, and a full-body, pleasant sensation that one [of our]
researchers actually described as "a wave of pure happiness". The rest of this [report]
will attempt to summarize our findings based on preliminary tests with [Seabed’s]
Nectar and, hopefully, lay die foundation for more extensive research. We [aligned]
Our testing regimen with a current case study: the notorious documentary footage
depicting an 84-year-old woman drinking twelve large Slusho! Beverages and [lifted]


* Thanks to Jawbone at Unfiction for finding this, and to Eddy at 11808.blogspot.com for emailing me about this!
** Unfortunately, the Science Forums people have already altered the post :(
Posted by Dennis at 1:19 AM