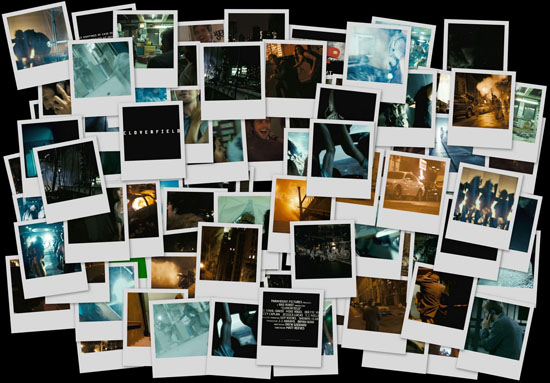 I have selected 88 screenshots out of the 3300+ frames of the new Cloverfield Trailer. You can view them all in my Picasa album.

Screenshots from the original teaser trailer can be found here.

Here are some of the most interesting photos:

Fighter jets dropping bombs on the city. In the screenshot before this one, you can see the those fighter planes.

This soldier has his face blurred in the video. However, the name on his uniform - Pryce - has not. Who edited the video?

It looks like someone is about to explode. Willy Wonka told you not to eat the Three-Course Dinner Chewing Gum

It's alive, It's huge! We finally get a tiny glimpse of the HUGE monster. Is that a turtle shell? FYI: Tagruato is an anagram for A TORTUGA, Spanish for turtle.

Marlena is wearing a Seahorse necklace. Is there any significance? FYI: It's a donkey on the Slusho! website

An empty horse-drawn carriage strolls by. Where has everyone else gone?

Here is the front view of the decapitated Statue of Liberty. Unlike the poster, it is still night in this photo.