Cloverfield will be getting it's own RiffTrax commentary on April 22! RiffTrax are third-party commentaries that you play while watching the movie. Brilliant idea!

RiffTrax.com is an innovative site featuring the hilarious DVD commentaries of Michael J. Nelson - Star of the legendary Mystery Science Theater 3000! At RiffTrax.com, you can download feature-length commentaries by Mike (plus other stars of MST3K and guest celebrities) and listen to these "RiffTrax" in sync with your favorite, and not so favorite DVDs. It's like watching a movie with your funniest friend. And it's super easy to do!

I'm sure these MST3K alum will have an interesting take on the movie - even their synopsis is funny: 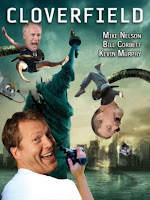 "What if a monster attacked a city?" This is the shockingly novel concept behind the viral marketing triumph of the year! Filled with "fresh"* performances and "authentic"** cinematography, Cloverfield masterfully takes a page from The Blair Witch Project, reworking the "snotty 20-somethings endure trauma while repeatedly saying 'dude'" genre into something unique while still being very much the same. Look for star turns by That Girl Who Was in Mean Girls and That One Dude Who Played Eric in The Sisterhood of the Traveling Pants.

Mike, Kevin and Bill's RiffTrax was found by the Department of Defense (and then thrown away, but we dug it out of a garbage can.)