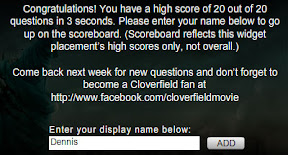 Round Three of the Cloverfield Widget Trivia has begun- 20 new questions, now with a timer and a leaderboard.

Here are the questions (and the answers):

Who starred in The Pallbearer – the first film directed by Matt Reeves, the director of Cloverfield? - David Schwimmer
In the 1998 film, what was supposed to have created GODZILLA? - Nuclear bomb testing
About how many people in the greater New York area were left without power in the 2003 northeast blackout? - 21 million
During the 2003 blackout, Amy Hilfiger – star of MTV’s reality show Rich Girls – was filmed doing what? - Riding a bus
What actor plays the President of the USA in the disaster film, INDEPENDENCE DAY, starring Will Smith? - Bill Pullman
On 1.18 1999, which hurricane ripped across western Europe, killing over 44 people in 20 countries? - Kyrill
When does Freddy Krueger stalk the kids in NIGHTMARE ON ELM STREET? - In their dreams
Why does Janet Leigh’s character hit the road in PSYCHO? - Stealing money from work
Which of the following disaster films grossed the most money at the box office? - Titanic
Approximately how many people are currently held in state or federal prisons existing within New York City? - 3,000
Where did the volcano emerge from in the 1997 movie, VOLCANO? - The La Brea Tar Pits
Approximately how many robberies occur in New York City each year? - 25,000
What oil company accepted responsibility for dumping 17 million gallons of oil into New York’s east river in 1950? - Exxon-Mobil
What is the rank of New York City among the US cities most likely to experience a major earthquake? - 4th
What is the likelihood that New York City will be hit with a hurricane in the next 50 years? - 75%
Where is the film, THE THING, set? - Antarctica
In what country is the Lock-Ness monster claimed to live? - Scotland
What is the name of the 260-foot-long giant shark that scientists have yet to prove extinct? - Megalodon
What was the name of the shark-hunting boat in the film, JAWS? - The Orca
From what country was the monster film, THE HOST, produced? - South Korea