Los Angeles website LAist has an in-depth interview with Cloverfield's director Matt Reeves, and some great new photos from the set.

Reeves has some interesting comments about Ethan Hass, fans speculation, and true origin of the title Cloverfield.

The film has had a very successful viral campaign. What do you think of Ethan Haas and the other people who took it upon themselves to capitalize on it?

All I knew was that we made this teaser trailer and had not given any information about it. People immediately started making connections, some of which connected to things that we were setting up, but others had nothing to do with us.

Some were amazing. ...we wanted to let people know that it was a monster movie in some way without saying, “Hey look! It’s a giant monster movie!” ...

I got up there and said into the mic, “I saw it! It’s alive! It’s huge!” That would be an indication that this thing was alive and huge. Apparently I speak very quickly, so people in the audience heard, “It’s a lion! It’s huge!” I remember coming home from shooting all day and I look online to see what the response has been to the trailer and I’m seeing that people have done a spectral analysis of the audio. They’ve got my voice and they’re playing it slowly. I read further and they’re convinced that I’m saying “It’s a lion!” and that it’s a voltron movie. I didn’t really know anything about voltrons before this, and they’re apparently giant robot lions [see the "leaked footage" parody on the YouTube video].

That kind of stuff started building. Then when there was all this weird Ethan Haas stuff, I remember Bryan and J.J. and I turning to each other and saying, “What is that? We don’t even know what that is.” That’s what happens when you confront people with a mystery. You can’t be surprised if they start making connections that have nothing to do with you. That’s exactly what happened.

When I look at the message boards to see what’s going on, and there will be somebody who has purported to have seen the movie and they’ll give details—very specific details—that have nothing to do with the film. I think, “People are amazing!” It’s fascinating and it’s just something I’ve never really been a part of prior to this. I mean, we had online fans during Felicity, but it was very different.

Tell us the real story behind the title Cloverfield?

When we started the project there was going to be an announcement in the trades. In this case, they wanted to keep everything under wraps. So the movie was going to be made under this outside corporation that was basically a property of Paramount. That corporation had a name that I don’t know the name of. I think Clover was the first part of it. Maybe it was Cloverdale. When Drew [Goddard, LOST writer] was putting a name to the project, there was supposed to be a name for the project like there was for The Manhattan Project. So he said, "I am going to use that weird mysterious thing," and he misheard it. He didn’t even understand that it wasn’t Cloverfield, it was Cloverdale. Maybe that was because of the street by J.J.’s old office, but the truth is he just misunderstood it.

* Thanks to B Met for emailing me about this! 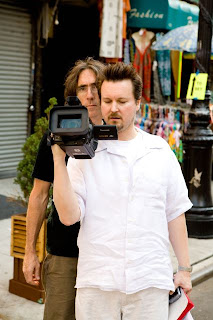 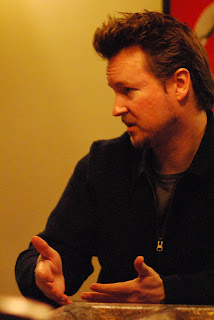